Visitors 176
21 photos
The Golden Temple,located in Amritsar India, is the most sacred and the holiest shrine for the 25 million people of the Sikh Religion. I was honored to visit this holy place during October 2007 and to pay homage to the memory of my maternal grandmother and paternal great grandfather, both of whom belonged to the Sikh faith.

I was particularly captivated to watch Sikh men and women participating in their religious lives on an equal footing at the temple. It was also endearing to see visitors, regardless of their race, gender, caste and religion, being welcomed to worship at this holy shrine--unlike many of the Hindu temples across India. In addition, I was touched by many people performing "Kar Seva"--volunteer service to upkeep the dignity of the shrine and to feed the poor and the hungry at the Langar.

While entering any Gurudwara (Sikh shrine),one is expected to remove shoes and cover ones head with cloth as a sign of respect for the sovereignity of Guru Granth Sahib--the Sikh holy book which is housed in that shrine.
My images of the Golden temple not only document the dignified beauty of the shrine but also depict the great respect and inner peace felt by the Sikh devotees during their visit to the Golden Temple. 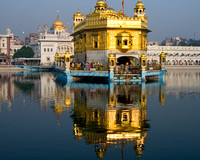 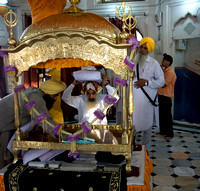 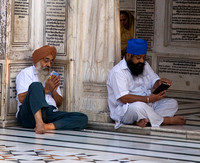 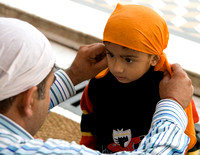 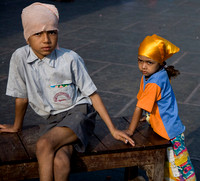