Visitors 133
31 photos
The nomadic Kazakhs of Western Mongolia, in the Altai mountain region, have been using Golden Eagles to hunt for many centuries. They train young Eagles to hunt for foxes, rabbits and other small prey to meet their need for warm fur clothings in the cold mountains of Mongolia. Mostly Kazakh men , but also few women, train to be Eagle Hunters as shown in the 2016 movie -The Eagle Huntress-which documented the true life story of Aisholpan— a 13 year old Kazakh teenager who became a champion Eagle Huntress. Nomadic Mongolians are also accomplished horse riders and take great pride in their skills.

These images capture (a) Eagle Hunters practicing for and participating in the annual Eagle Hunting Festival in Uligii, (b) views of their living quarters nomadic tents called (Gers)and (c) views of the harsh but beautiful natural terrain where these nomads live in Mongolia. 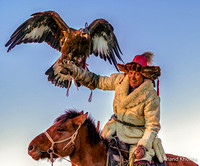 Eagle Hunter at the Uligi Festival

Skilled Horseman at the Festival

Displaying his Eagle at the Festival

Eagle Huntress riding to the Festival

Fox skin Tug of War at the Festival

Moment of Rest for the eagle

The Front of the Parade at the Festival 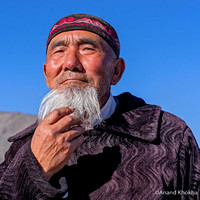 Eagles wrapped in blankets being transported to the Festival

Colorful costume in desolate country side

Bekysh with his mother in their Ger tent 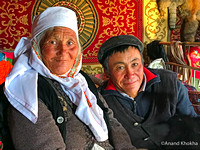 Eagle and its just caught prey