Visitors 23
29 photos
This joint exhibit of Sara Levinson and Anand Khokha's images are being displayed at the Farmers gallery of the Commonwealth Club in San Francisco. The exhibit opens on September 12, 2019 and will be open till December 1.
The primary focus of the images from Burma are (a) Leg Rowers fishermen from Lake Inle, (b) Buddhism in Burma and (c) miscellaneous images of village life.

The Inle Lake is located in the Shan district in the center of Burma and is surrounded by beautiful green hills. Intha's are the local people whose lives are centered on this lake--even their name means " sons of the lake". They fish and grow vegetables and flowers on the lake in floating beds of water hyacinth and grasses.

Intha fishermen are the only people in the world who propel their fishing boats by "leg rowing".Their unique "leg rowing" style involves standing at the stern on one leg and wrapping the other leg around the oar, and with a circular motion, they propel the boat forward. This "leg rowing" technique gives them a better view of the waterways and makes it easier to locate fish and to navigate around the floating islands. These fishermen also use a conical fishing trap which has a ring holding the net. On spotting the fish, these conical nets are thrust into the lake which helps them catch carp, catfish and eel.

Burma (Mynamar) is predominantly a Buddhist country with about 90% of its people practicing Thiravada tradition of Buddhism. It is also the most religious Buddhist country in the world when measured in terms of proportion of monks in the population and based on the ratio of income spent on religious activities.

Buddhism has been practiced in Burma for over 2000 years.Thousands of temples and pagodas which are devoted to Buddhism are scattered throughout the country. Bagan, once the center of Buddhism alone has over 2000 temples. The holiest of these shrines is the huge complex of Shwedagon temple in the middle of its capital-- Yangon (Rangoon).

Standing tall in the evening Light

End of the day--Coming Home

Offering Prayers in a cave temple 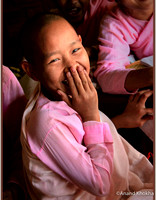 Devotion of the Tayar village women

Father and son at prayers